The time has come, Il Divo’s eagerly awaited brand new album AMOR & PASION is out now – and it is sure to be music to your ears!

AMOR & PASION is Il Divo’s seventh studio album – and their most ambitious yet. The tracks that make up the album are mostly familiar hits – such as Julio Iglesias’ iconic A Las Mujeres Que Yo Ame (To All the Girls I’ve Loved Before) and Gloria Estefan’s resonant Si Voy A Perderte (Don’t Wanna Lose You), along with Himno De La Alegria, an exciting Latin treatment of Beethoven’s Ode To Joy and one of the most classic tangos of all time, Por Una Cabeza which was written in 1935 and was used in both Schindler’s List and the Al Pacino film Scent Of A Woman.

Speaking about the album, Urs said: “I am so inspired by this album. A lot of the music was completely unknown to me before. And it’s beautiful music. It’s very happy, very uplifting, very passionate – it is music full of love.”

Excited to hear it? Well, you can get your copy now.

As well as giving fans a brand new album, the guys have also unveiled details of the accompanying AMOR & PASION TOUR which kicks off in Argentina in March 2016. 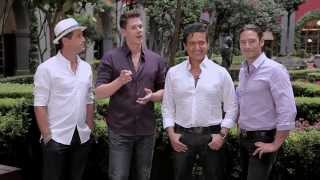